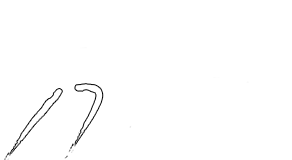 Jim Mike Hinzman is the CEO of East Athens Physical Therapy. He is a licensed physical therapist and has been practicing since 2000. Jim Mike earned his Bachelors of Science in Biology at the University of Georgia and a Masters of Physical Therapy at the Medical College of Georgia.

Jim Mike is a Certified McKenzie Provider. McKenzie Physical Therapists specialize in the assessment and treatment of lumbar and cervical disorders through proven, evidence-based criteria. He enjoys using the newest PT technologies such as Neubie Neuromuscular e-stim and Heart Rate Variability to accelerate patient outcomes.   In his spare time, Jim Mike enjoys helping his three girls, Ava, Caroline, and Charlotte, with their sporting activities and spending time with his wife, Tanya. Lindsey Argroves is a licensed PT that joined EAPT in January 2021. She attended Armstrong State University where she graduated with her B.S. in Rehab Sciences in 2015. She then went to Wingate University in North Carolina for graduate school where she received her Doctor of Physical Therapy in December 2020. She has returned to EAPT to start her journey of treating others and helping them reach their goals.

Lindsey is a born and raised Madison native who loves being back in the Morgan County community. She has returned to educate and help others through their physical therapy journey. Her favorite aspect of work is interacting with patients, expanding her knowledge, and motivating each person to reach their goals.

In her spare time, she enjoys watching Netflix, cooking, working out at the gym, and spending time with her 3 dogs: Georgia, Max and Otto. MaryLou Guenther is a licensed Physical Therapist Assistant who graduated from Athens Technical College in April of 2020. Originally from the John’s Creek/Alpharetta area, MaryLou moved to Athens in 2011 and has loved it ever since.

MaryLou has recently completed an Otago Balance course and is passionate about helping people recover and achieve their goals.   MaryLou enjoys being a part of the East Athens Physical Therapy family, and loves getting to know her patients and be a part of their healing.

In her spare time, MaryLou enjoys spending time with her dog, Buffy, in the great outdoors or cuddling on the couch. She also loves theatre, concerts, a good-iced coffee, and relaxing with family and friends. Rachel Nation is a licensed physical therapist who joined the East Athens Physical Therapy team in May 2019. She graduated with her B.S. in Biology in 2015 from the University of North Georgia and worked as a PT tech for EAPT until she returned to school in 2016. She graduated with her Doctorate of Physical Therapy degree in 2019 from the University of North Georgia. She returned and accepted a job at EAPT where her love of helping people heal and get better began.

Being from Oglethorpe County, Rachel is excited to be able to work with her community and see her family and friends reach their goals. She loves working with the EAPT family. Her favorite part of work is meeting her patients, learning about their lives and passions, and helping them get back to doing the things they love.

While not at work, Rachel enjoys spending time with her husband (Jeremy) and daughter (Finley), born in 2021, as well as her family and friends. She also loves reading, traveling, and taking care of her horse and chickens. Annabeth is excited to be working in her hometown, getting to know her patients, and seeing them work hard to meet their goals.

In her spare time, Annabeth enjoys reading and cheering on the Atlanta Braves and her Georgia Southern Eagles. Kate is a licensed physical therapist that joined the East Athens team in 2018. She earned a B.S. in Kinesiology from the University of Tennessee in 2014 and a Doctor of Physical Therapy from Mercer University in Atlanta in May 2018.

Originally from Maryville, Tennessee, she moved to the Athens area in July 2018. She is excited to be a part of the community here. She loves helping her patients on their journey to recovery and watching them get back to doing what they love to do.

In her spare time, she enjoys volleyball, exploring new places, watching college football, and spending time with family and friends.

Michael has completed several courses from the McKenzie Institute to continue his education in low back and neck treatment. Michael has enjoyed his time with East Athens Physical Therapy. He loves spending time with people and getting them back on their feet.

In his spare time, he enjoys spending time with his wife Bonnie and their new baby daughter Ellie. He also enjoys being in the great outdoors. Chris is a McKenzie trained physical therapist having completed 4 courses from the McKenzie Institute in addition to a course update. He also enjoys working with sports related injuries as well as general orthopedic injuries.

Chris enjoys being at East Athens Physical Therapy and strives to make each patient feel welcomed and comfortable during their treatment sessions. He works hard at helping his patients to relieve their symptoms as quickly as possible.  In his spare time, Chris enjoys spending time with his wife, Christen, and their three children, Alice, Caleb, and Vince. They enjoy fun family trips to the beach and mountains as well as watching the kids play sports and watching Georgia football. Stephanie enjoys being a part of the East Athens Physical Therapy team. Her favorite part of the job is getting to know her patients while supporting and encouraging them as they work towards activities they are passionate about. She also enjoys integrating the Neubie into treatment plans and seeing patient recovery accelerated and outcomes improved.

In her spare time, Stephanie enjoys spending time with her husband Michael and her children Ellie and Jack. They enjoy cheering on the Georgia Bulldogs and the Atlanta Braves together. Stephanie is a native of Watkinsville and is glad to have returned to the Athens area. Melissa is an alumna of the University of Georgia with a Bachelor’s degree in Exercise and Sports Science. She attended Athens Technical College to complete her degree for Physical Therapist Assistant.

She is excited to use her knowledge and compassion to help as many patients as possible in the Athens area and help them return to pain free activity. In her spare time, she enjoys running anything from a 5k to a 50k, playing with her dogs, and spending time with friends and family. 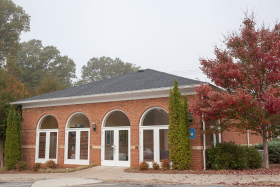 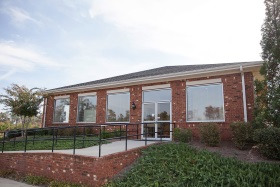 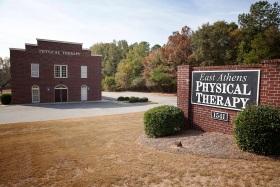